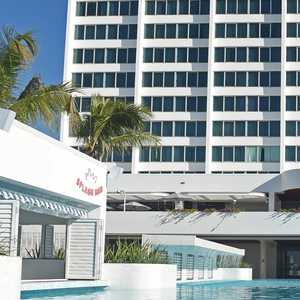 About 600 staff from The Ville Resort-Casino have been stood down as the coronavirus outbreak effectively shuts down the hospitality industry.

They are among hundreds of thousands of people suddenly without work.

The hotel informed staff of the shutdown about 2pm today, unable to say when operations could resume and hoping government support measures are implemented quickly.

"We just can't support and continue to pay these people during the period when we have no revenue," the hotel's CEO, Michael Jones, said.

"I feel awful for these people and I hope when we are ready to open again that they'll be able to come back and continue to work for us."

The government announced centres including pubs, casinos, cinemas and night clubs would have to close by midday Monday, while allowing hotel accommodation to continue to trade.

Mr Jones said they closed the casino and the hotel's food and beverage outlets on Monday but would also close the hotel from Friday because they would have no guests and no business.

"If they were staying here, there's no restaurants to eat in, no bars to drink in, so we'll be shutting entirely," Mr Jones said.

He said people's health and safety was paramount but that the economic impact could not be understated.

"Businesses are going to be hit hard and I really feel for everyone who's going to be doing it tough," Mr Jones said.

"For The Ville, we are going to be back in business as soon as the authorities deem it safe to do so, so that we are able to operate with full confidence that the virus is under control and people can go out and enjoy themselves again."

Mr Jones said staff with annual and long service leave could take these entitlements but that otherwise Centrelink support would be an option.

"It's encouraging (the government) have made these announcements of support. I just hope the cash starts flowing soon for these people because they need to be able to eat and feed their families," Mr Jones said.

Restaurants and cafes will be restricted to takeaway and/or home delivery, while religious gatherings, places of worship or funerals are also restricted, where the 1 person per 4 square metre rule applies.

People are being told to expect the measures to be in place for six months.