Aldi bag 100k may have been casino win: ICAC 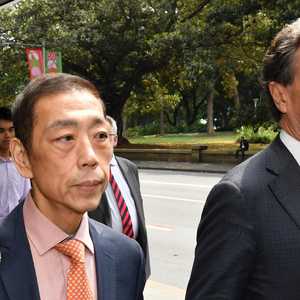 Exiled Chinese billionaire Huang Xiangmo may have won the $100,000 he allegedly donated to the NSW Labor Party after gambling heavily at a Sydney casino, a corruption inquiry heard.

The Independent Commission Against Corruption is investigating whether multiple "fake" donors were used to hide the property tycoon's illegal cash contribution banked into the party's coffers on April 9, 2015.

Surveillance logs from The Star reveal Mr Xiangmo's employee withdrew "$100K cash" from his high roller account on April 3 - the same day it was set up - before leaving in a white Audi.

Records show the Casino considered this large Good Friday transaction to be "suspicious."

The Star's group investigations officer told the inquiry Mr Xiangmo funded a $5 million junket program at the casino which was organised by a business manager of his Yuhu Group.

Kevin Houlihan, who was asked to review Mr Xiangmo's gaming records, said the winnings soared to nearly $10 million on April 3 before the account closed with a mere $680,000.

"Whoever was doing the gambling on the 3rd of April was doing pretty well, but things turned for the worse later," counsel assisting Scott Robertson said.

Ex-party general secretary Jamie Clements, who stood down in 2016, has been accused of accepting the $100,000 cash from Mr Huang in a plastic Aldi shopping bag four days later.

Mr Huang denies being the source of the money.

Former NSW Labor MP Ernest Wong has testified Mr Huang offered to deliver the "big bag of cash" to ALP head office in Sussex Street as he had planned to meet the Labor boss within a few days.

Mr Wong has been branded "the ringleader" in the fraudulent scheme to cover up the donation by pressuring eight people to falsely declare the money came from them.

On Wednesday Mr Wong denied suggestions from Mr Robertson that his evidence concerning a crucial Chinese Friends of Labor dinner held in March 2015 has been characterised by "obstruction, avoidance and lies."

This week Mr Wong declared he had an "alcoholic blackout" after the fundraiser party and can't remember who he gave a bag of donation forms and possibly cash to that night.

But the man who sat in the NSW upper house until March previously told the inquiry he was left with a bag of donations worth tens of thousands of dollars on the night of the dinner and Mr Huang offered to take it with him.

As a property developer, Mr Huang was prohibited from making donations to NSW political parties and is now banned from Australia.

The hearing was told Chinatown restaurateur Jonathan Yee, who convinced low-paid waiters and others to back false stories they each gave sums of up to $10,000 at the event, was considered Mr Wong's lieutenant in the plot.

Mr Wong denied pressuring the donors to keep their mouths shut when confronted with their sworn witness evidence they were used as "straw donors."

The public hearing, which began in August, has now concluded with the watchdog to deliver its report at a later date.