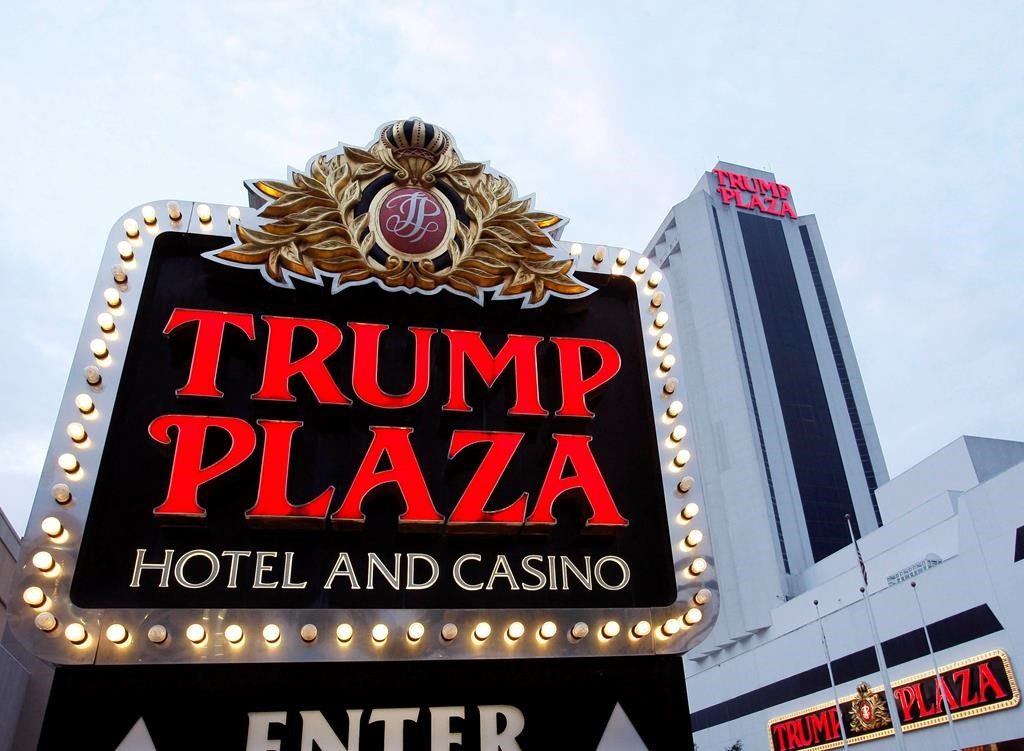 File-This Oct. 12, 2010 file photo shows the Trump Plaza Hotel Casino in Atlantic City, N.J. Atlantic City's mayor wants to demolish the former Trump Plaza Hotel & Casino. Mayor Marty Small said in a speech Thursday, Jan. 16, 2020, to a business group that knocking down the vacant casino once owned by President Donald Trump is one of his main goals for 2020. It is currently owned by billionaire Carl Icahn, who assumed ownership of Trump's former casino company from bankruptcy in 2016.

Atlantic City, N.J., Fire Chief Scott Evans speaks at a news conference, Thursday, March 12, 2020, in Atlantic City, calling for the immediate demolition of the former Trump Plaza casino, parts of which have crumbled and fallen onto a sidewalk.

Mayor Marty Small speaks at a news conference, Thursday, March 12, 2020, in Atlantic City, N.J., calling for the immediate demolition of the former Trump Plaza casino, parts of which have crumbled and fallen onto a sidewalk.

The exterior of the former Trump Plaza casino is shown, Thursday, March 12, 2020, in Atlantic City, N.J. Atlantic City officials held a news conference calling for the immediate demolition of the building, parts of which have crumbled and fallen onto a sidewalk.

The exterior of the former Trump Plaza casino is shown, Thursday, March 12, 2020, in Atlantic City, N.J. Atlantic City officials held a news conference calling for the immediate demolition of the building, parts of which have crumbled and fallen onto a sidewalk.

ATLANTIC CITY, N.J. (AP) -- Atlantic City officials said Thursday that they will ask a judge to order the immediate demolition of a shuttered casino once owned by President Donald Trump, but its owner says he has already decided to tear it down.

The maneuvering over the former Trump Plaza casino, now owned by billionaire Carl Icahn, comes after pieces of the building's facade tore loose in recent days and came crashing to the sidewalk.

City officials inspected the building and declared it an imminent risk to public safety.

At a news conference Thursday, Mayor Marty Small said his administration would file papers in Superior Court later in the afternoon, asking a judge to order that the nearly 40-year-old building be torn down as soon as possible.

But Icahn, who took ownership of the casino company through a bankruptcy proceeding, said through a spokesman he had already agreed to tear it down.

"We are puzzled by the city's action," Hunter Gary, president of real estate for Icahn Enterprises, said in a prepared statement. "In fact, we already decided to demolish the building, and have commenced the process, including finalizing contracts. If the mayor had simply called us instead of holding a press conference, we could have updated him as well."

The statement did not address when Icahn hopes to have the building demolished, and the company did not respond to a request for clarification on his timetable.

In his news conference, Small did note that the city and Icahn have been in negotiations for several weeks regarding the demolition of the casino, which opened in 1984.

"We are both on the same page about seeing this building demolished, but maybe with different paths," he said.

But Small added the recent deterioration of outer walls on the casino hotel building have left gaping hopes that will only get worse with continued wind and rain. City buildings department officials and firefighters inspected the building, including flying drones over and next to it, and determined it is an imminent risk to public safety.

"We could have had a fatality," Small said. "We had high school wrestling championships with 13,000 people walking nearby."

"There are five big holes in this building," said Fire Chief Scott Evans. "We're going to see more panels fall. This poses a threat to the surrounding area."

In recent years, Icahn has requested the use of more than $5 million in redevelopment tax payments that Trump Plaza made while it was operating to help offset the cost of demolition.

Trump Plaza was one of four Atlantic City casinos that shut down in 2014 during a period of contraction in the local casino industry, brought about by increased nearby competition and an oversaturated market. Another Trump casino, the Taj Mahal, closed in 2016, though it reopened under new ownership in 2018 as the Hard Rock.

Trump cut most ties with Atlantic City in 2009 aside from a 10% fee for the use of his name on what were then three casinos in the city. That stake was extinguished when Icahn took ownership of the company out of bankruptcy court in February 2016.

Copyright 2020 The Associated Press. All rights reserved. This material may not be published, broadcast, rewritten or redistributed without permission.

Subscribe for just 23¢ per week Support quality journalism Get unlimited access to tucson.com and apps No more surveys blocking articles