Casino exec: Success set to get even better 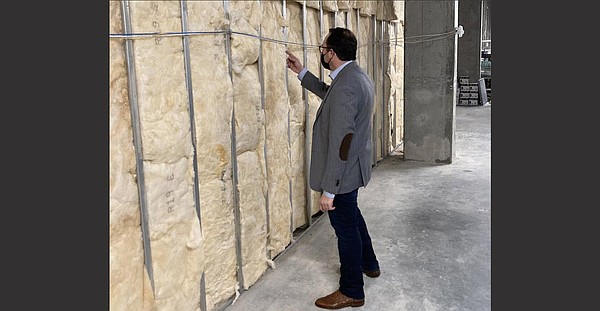 Arguably, the biggest news in 2020 for Pine Bluff was the mid-October opening of the Saracen Casino Resort.

The Saracen Casino Annex had opened a year before, so it wasn't as if gambling had just come to Pine Bluff, but when the doors opened to the main casino, it was the culmination of the hopes and dreams of those on both sides of the casino -- those bringing it in and those welcoming it.

And the timing could hardly have been worse, what with a third spike of the coronavirus pushing Arkansas' worsening condition with covid-19 onto the national stage as a place to avoid.

And yet, things aren't so bad, according to Carlton Saffa, chief market officer with the casino.

"Covid has cost us 35% of our revenue," he said during a tour this week of the facility. "But we are in an enviable position because we are still profitable. And as we scale up, costs will not scale up at the same pace as revenue, so we see a tremendous upside."

As Saffa spoke, he would occasionally sprinkle the conversation with factoids he had picked up while watching over the construction.

"There are 1,003 air vents in the floor," he said, "and the air turns over every eight minutes. That's a little geeky, but that's all I did for a year of watching this process."

The fact that the casino is doing well provides a bit of a relief for the city of Pine Bluff and Jefferson County. City officials recently postponed some planned raises for city workers for fear that, if the pandemic continues to worsen, the casino might have to close its doors, and the tax money that would be used to pay those increased wages would be lost, at least temporarily.

But for now, money keeps rolling into city, county and state coffers. The way that works, Saffa said, is a bit of a calculus problem. There's how much is bet, which is called "coin in," and then how much is paid out, called "coin out." The difference is "the hold." That amount -- and there's someone with the state who watches over this calculation -- is then used in the equation for how the taxes are figured.

Out of that tax number, 8% goes to Jefferson County, 19.5% goes to Pine Bluff, 17.5% goes to the Arkansas Racing Commission to subsidize the purses for live horse racing, and the rest goes to the state.

The total for this tax has been as high as almost $800,000 for a single month, but in May, when the conditions with covid were particularly bad, taxes were only $119,000.

That is but one tax the casino pays, Saffa said.

After Saffa pointed out that the floor of the casino was actually not the floor but was raised four feet up so that 19 miles of electrical conduit could be placed there, he spent some time talking about the hold. If anyone has traveled in Nevada, for instance, they may recall seeing signs that advertise a casino that say "Loosest slots in town." That looseness, Saffa said, has to do with how much or little a casino keeps. For Saracen, that number is 7%. The hold at Oaklawn Racing Casino Resort, Saffa said, pointing to publicly available information the state keeps, is somewhere between almost 8% and almost 9%.

Saffa said he has been encouraged to advertise the fact that Saracen's hold is less than Oaklawn's but he said he has resisted doing that.

"We have the lowest hold in Arkansas, but I'm very reluctant to advertise that," Saffa said. "I see it as a cheap form of marketing. We want people to come for more than the betting. This is more than just a casino. This is our business."

Saracen's 7% hold, he said, could change in the future.

"That's what we came up with," he said. "We will adjust with the market."

In describing the concept of gambling and the decision to settle on a hold percentage, Saffa said a slot machine is similar to an ATM at a bank. With the ATM, a person is in control of how much money goes into and out of it. With a slot machine, a person controls how much goes into it.

"And we essentially charge the hold to give people the opportunity to win a big prize," Saffa said.

If the hold is too high, it ruins a lot of what the casino is trying to accomplish, he said.

"People may not know exactly how much the hold is, but if it's too high, they'll feel it here," Saffa said, holding his hands to his chest.

When people come to the casino, they are constrained by two things, Saffa said: time and money. He said he can't do anything about their time constraints, but he can adjust the hold so that the person betting has some entertainment along the way.

"If you come in with $200 to spend and you're out of money in 20 minutes, that's no fun," he said. "The hold speaks to that. If you don't have a good time, you may not come back. We want people to have a good experience, and the longer they are here, maybe they get something to eat or drink and give the dealers a bigger tip. It's the overall experience we are interested in."

One of the biggest amenities in the casino, other than the gambling, is the upscale Red Oak Steakhouse with its pricey aged beef and bison steaks. Saffa said the restaurant has been open 10 weeks and in that time, it had 2,000 customers, two-thirds of whom had reservations.

"That tells us that we are getting a lot of folks driving from Little Rock and elsewhere for a destination," he said. "That tells us these folks are coming for a big night."

Saffa said the casino's goal was to create the best restaurant in the state, "and I believe that we're there."

One of Saffa's responsibilities is enhancing customer experience at the casino, and to do that job, he listens carefully to the people who walk in the door.

"There are three things people invariably ask me about: poker, the steakhouse and sports betting," Saffa said. The poker room has been doubled in size, "even during covid," he said. "We talk about the restaurant all the time. Consequently, my time is being spent on enhancing the sports betting experience."

To that end, the casino is rolling out an app soon that will allow betters to bet on sports from anywhere in the casino, he said. And at some point, he said, the seating in the sports betting area will be big and plush but that such furnishings don't work during a pandemic.

"That's nuts," he said, getting off an elevator onto a floor that was a large concrete room. "You're standing on the second floor of the hotel. We've done the deep pile driving for the hotel and built the first four floors of it."

Asked about competition for the gambling dollar, Saffa said he's comfortable where Saracen is.

"We're exceeding Oaklawn," he said. "They're 117 years old, and we're 17 months old. There's plenty of room in this market and they are tremendous colleagues."

And even with the competitive environment and the wet blanket from the covid-19 pandemic, Saracen is "revenue positive," he said.

"Are we shooting the lights out? No. But we're doing very well considering the circumstances. Clearly, this was the right decision. Clearly, Pine Bluff was the right place to come."