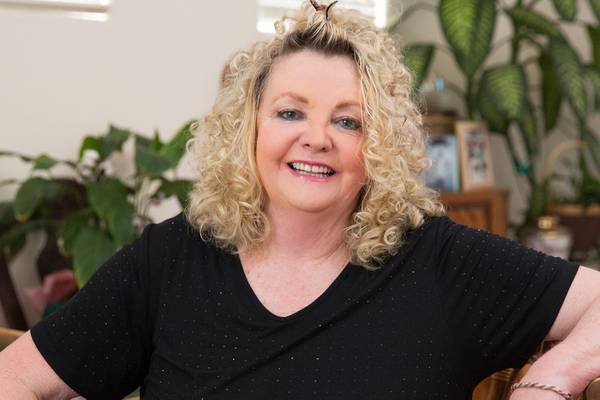 Teresa Price worked in the casino industry full-time for 28 years and part-time for seven years until fall 2017, when she took a medical leave after being diagnosed with non-Hodgkin's lymphoma and heart disease. A nonsmoker, Price, like other casino workers facing similar diagnoses, is convinced that constant on-the-job exposure to secondhand cigarette smoke contributed to her illness.

Teresa Price was 22 when she quit college to become a table-games dealer, landing a job in 1978 on the Strip. At that time, smoking was allowed nearly everywhere -- offices, restaurants, grocery stores, airplanes, even hospitals. Casinos were no exception.

Today, nearly all workplaces in Nevada have gone smoke-free, but casino employees like Price continue to work in smoky environments. Price worked in the industry full-time for 28 years and part-time for seven years until fall 2017, when she took a medical leave after being diagnosed with non-Hodgkin's lymphoma and heart disease.

Never a smoker herself and otherwise healthy and fit, Price is convinced that the constant exposure to secondhand smoke as a dealer contributed to, if not caused, her ailments.

"I love the job and meeting new people every day," said Price, 63. "But the environment is unhealthy."

Secondhand smoke has been shown to increase the risk of many diseases, including lung cancer and heart disease. Some research shows a link between secondhand smoke and non-Hodgkin's lymphoma as well. No level of exposure to secondhand smoke is considered safe, according to the U.S. Surgeon General's Office.

Price's story is similar to that of other casino workers, according to Kanie Kastroll, a Las Vegas dealer and a volunteer organizing committee member with the dealers union, UAW Local 3555.

Kastroll, who has been a dealer in Las Vegas for 30 years, says she has seen many colleagues become sick with cancer or other conditions as a result of cigarette-smoke exposure.

"It's one of the biggest complaints other than abusive guests that (the union) has," Kastroll said. "When you're sick, you get sicker, or you're sicker longer."

Many casino companies in Las Vegas have installed ventilation and filtration systems designed to suck up cigarette smoke and circulate fresh air, said Dawn Christensen, vice president of communications and corporate responsibility at the Nevada Resort Association. Individual casino companies didn't not comment for this story.

"From specialized ventilation and filtration systems to air-handling units located at table games and the bases of gaming devices, the industry continues to utilize the latest innovations to provide improved air quality for our employees and guests," Christensen wrote in a statement.

But the Centers for Disease Control warns that no filtration or ventilation system can eliminate the health risks associated with secondhand smoke. The American Society of Heating, Refrigerating and Air-Conditioning Engineers maintains the same stance, according to a position document on environmental tobacco smoke authored in 2010 and reaffirmed by the organization in 2019.

"The particle size of the constituents of smoke are so small that these air filters don't do a thing," said Chris Pritsos, director of the Nevada Agricultural Experiment Station at UNR and author of several studies on secondhand smoke in casinos. "They might knock it down 10% or so, but that does not stop the harmful effects."

Las Vegas casino workers are not protected by casinos' ventilation systems, no matter how high-tech, said Maria Azzarelli, manager of chronic disease prevention and health promotion at the Southern Nevada Health District. The only way to reduce the health risks associated with secondhand smoke is to install completely separate filtration systems in entirely nonsmoking areas, Azzarelli said. That, or ban smoking.

"There's nothing that can clean the air to remove secondhand smoke," she said.

Much of Nevada went smoke-free in 2006 when voters approved a ballot measure banning smoking in indoor public places and places of employment. For the first time, Nevadans and tourists could no longer smoke wherever there were slot machines, such as in grocery stores.

But from the get-go, there were a few exceptions to what became known as the Nevada Clean Indoor Air Act: Bars, age-restricted taverns and saloons that don't serve food; strip clubs and brothels; and casino floors could still allow smoking.

The Nevada Legislature revised the law over the next few years to also allow smoking in tobacco-related private conventions and in bars and taverns that do not allow minors, according to online records. No revisions have been made since 2011.

Because there is no law banning cigarette and cigar smoking in casinos, the only smoke-free casinos in state history became that way by choice. There is one smoke-free casino in Nevada currently operating, according to a list compiled by the American Nonsmokers' Rights Foundation: The Fernley Nugget, about 40 miles east of Reno.

When the Fernley Nugget opened in 2011, the goal of the venture wasn't to protect people's health, but to cater to those looking for a smokeless gaming environment, said Scott Tate, general manager of the casino. Since then, the Fernley Nugget has developed a devoted following among patrons and employees, Tate said.

"I'm not going to sit here and say I'm pro-smoke-free facilities. I will say I think there's a niche for it," Tate said.

The Fernley Nugget's parent company, Nugget Casinos, manages about a dozen other casinos in Northern Nevada, none of which are smoke-free, Tate said. Despite the Fernley Nugget's continued success, Tate says the property would be more profitable if it were opened up to smokers.

"I think we're leaving a lot on the table by doing this, but I think I understand the business better as a whole for our overall company," he said. "I've learned a lot by it, but it's an expensive education."

The economic impacts of restricting or banning smoking in Nevada casinos could be far-reaching, according to David Schwartz, a gaming historian at UNLV. Gaming revenue has declined by about 15% in other jurisdictions after the enactment of a smoking ban, Schwartz said.

Paula Larson-Schusster, a dealer downtown and on the Strip since 1990, has never been a smoker but has developed a "smoker's cough" and gets frequent sinus infections, bronchitis and chest congestion, all of which are have been associated with secondhand smoke exposure. Yet, she doesn't favor curbs on smoking in casinos if it means fewer customers gambling. "The bottom line is, if we don't have customers, I don't have a job," said Larson-Schusster, who belongs to the United Auto Workers Local 3555, which represents dealers at several local casinos.

"So that's one of the reasons why casinos may be hesitant to do this," he said.

But Pritsos disagrees with that long-cited economic argument. Pritsos conducted a 2011 study that found that those who gamble in Nevada's major destinations -- Reno, Lake Tahoe and Las Vegas -- do not smoke at a higher rate than the general population.

He sees that study's findings as a sign that the connection between smoking and gambling and the potential effects of a smoking ban on the gaming industry are widely overstated.

"This is the exact same argument that was put up when the smoking ban went into effect in restaurants: 'All the restaurants are going to shut down.' Well, that (didn't) happen," Pritsos said.

Casinos less smoky but no safer

That trend seems to be reflected among casino patrons, dealers say. Paula Larson-Schusster, who has been a dealer downtown and on the Strip since 1990, said the number of people who smoke in casinos has gone down. Even so, it only takes one or two smokers at a table at a time to make her eyes itch and her clothes reek by the end of an eight-hour shift.

"Probably 80% of (smokers) are much more aware of secondhand smoke or are more careful, but there are still going to be individuals that just don't care, and they'll blow it right in your face," Larson-Schusster said.

Even if they aren't regular smokers, it is common for casino patrons to light up simply because they're allowed to, or because others around them are doing the same, according to Kastroll and Price.

"They say something like, 'I only smoke when I'm in Vegas.' Or, 'When I drink, I smoke,'" Kastroll said.

Larson-Schusster, who has never been a smoker, has developed a "smoker's cough" after 29 years of working in casinos, she said. The 60-year-old also gets frequent sinus infections, bronchitis and chest congestion -- all of which are associated with secondhand smoke exposure, studies show.

Lysa Buonanno worked as a cocktail waitress for 17 years in Las Vegas casinos and now is fighting stage 4 lung cancer, despite having never smoked and being a lifelong runner.

While dealers seem to be the most exposed to such smoke, it impacts servers in smoky gaming bars as well. Former cocktail waitress Lysa Buonanno, who worked in bars in on Boulder Highway, the Strip and elsewhere from 1992 to 2009, has been in treatment for stage 4 lung cancer for eight years.

Buonanno, who never smoked and described herself as a lifelong runner and "health nut," believes the exposure to smoke on the job contributed to the cancer.

"I can't say one way or another, obviously, but I was in that environment full-time for 17 years," she said. "Especially in the bar atmosphere, where it was much smaller and ceilings were lower, it was extremely smoky. You felt it and you saw it as soon as you walked in the door."

Buonanno had graduated college to start a new career as a radiology technician just before her diagnosis in 2011. Although she is grateful to be alive, she says she hasn't been able to work since then.

"It's hard to be told at 40 years old that you have a disease that kills most people in a year," Buonanno said.

While Buonanno, Kastroll and Price want the state to ban smoking in casinos, Larson-Schusster wouldn't want to force a ban if it affected companies' profits -- or workers' jobs. She also says that casino executives at the Flamingo, where she currently works, are willing to work with dealers on this issue, having installed fans on most Flamingo tables to blow away smoke.

"The bottom line is, if we don't have customers, I don't have a job," Larson-Schusster said.

For other workers, that argument doesn't stick, given that many successful casinos elsewhere are smoke-free. In the Chinese gambling center Macau, where MGM Resorts, Las Vegas Sands and other Las Vegas-based companies own property, smoking has been outlawed on casino floors since 2014; it is only allowed in closed-off, designated areas in casinos.

Encore Boston Harbor, a Wynn Resorts casino that opened in June in Everett, Mass., is completely smoke-free. In fact, laws in Massachusetts and 19 other states forbid smoking in all state-regulated casinos.

"It's proof that they can still survive and still make money," Buonanno said.

But in a state where casino companies dominate the economic and political scene, Nevada lawmakers don't seem keen to follow the lead of other jurisdictions. Former Nevada assemblyman and senator and current Clark County Commissioner Tick Segerblom said that while a smoking ban would probably not impact casino revenue, it is unlikely to happen.

"It's just part of the Las Vegas culture," Segerblom said. "We do things other states don't do, and that's why people come here."

For now, advocates like the Southern Nevada Health District say they'll keep trying to educate the public about the health risks of smoky casinos and to lobby state officials for completely smoke-free workplaces.

"We don't want anyone to be exposed to secondhand smoke in the workplace, including in gaming areas of casinos," Azzarelli said.

Workers, meanwhile, will continue to grapple with whether to expose themselves to secondhand smoke or to abandon their livelihoods -- and their health insurance. Price, whose medical leave expired last month, still hasn't decided whether she would return to work.

The property's parent company has offered her positions in some other areas of the company, including as a cook or a host, but at 63, she doesn't know how she would obtain training for the new jobs, she said. Plus, she loves being a dealer.