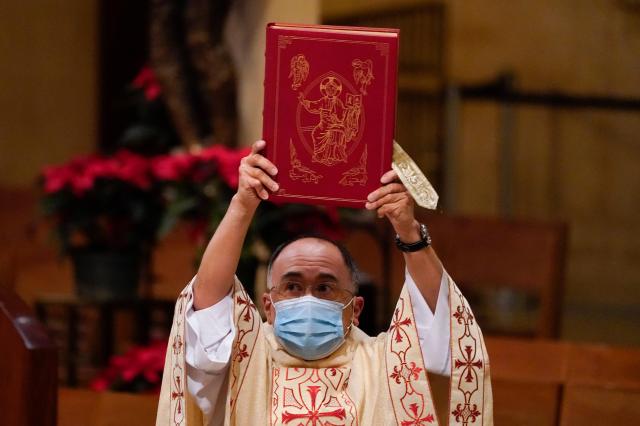 LOS ANGELES (AP) -- California's deadly Christmas was marked by pleas to avoid holiday gatherings outside the home and indoor church services in what could be a make-or-break effort to curb a coronavirus surge that already has filled some hospitals well beyond normal capacity.

Festive gatherings with friends and family might be tempting after a year that has seen the pandemic take at least 23,635 lives and ravage the economy as much of the state remained under a stay-at-home order that has closed nonessential businesses.

But officials repeated warnings that Thanksgiving gatherings where people didn't wear masks or observe social distancing have resulted in a surge and begged people to forego Yule and New Year's festivities.

In Sonoma County in California's wine country, a Native American casino announced it was canceling a planned private New Year's Eve indoor event that could have drawn as many as 4,000 people. The Graton Resort and Casino is on sovereign native land that isn't subject to state or county health orders but it had come under scrutiny for the event.

Gov. Gavin Newsom said hospitals are under "unprecedented pressure" and if current trends continue the number of those hospitalized because of the virus could double in 30 days.

"We could have a surge on top of surge on top of a surge in January and February," Newsom said in a social media video posting Thursday. "I fear that but we're not victims to that if we change our behaviors."

Coronavirus cases, hospitalizations and deaths have mounted exponentially in recent weeks and are breaking new records. On Christmas Eve, California became the first state in the nation to exceed 2 million confirmed COVID-19 cases.

The first coronavirus case in California was confirmed Jan. 25. It took 292 days to get to 1 million infections on Nov. 11. Just 44 days later, the number topped 2 million.

The crisis is straining the state's medical system well beyond its normal capacity, prompting hospitals to treat patients in tents, offices and auditoriums.

As of Thursday, California had record numbers of COVID-19 patients in the hospital and in ICUs, at nearly 19,000 and nearly 4,000, respectively.

"They're suffocating to the point that they can no longer breathe on their own, and they have to have someone put a tube down their throat, in order to oxygenate their organs. Many of these people will not live to be in 2021," she said.

Hospitals have also hired extra staff and canceled elective surgeries -- all to boost capacity before the cases contracted over Christmas and New Year's show up in the next few weeks.

"We understand that people are tired, but public health measures are not the enemy -- they are the roadmap for a faster and more sustainable recovery," said a statement from the Public Health Alliance of Southern California, which includes 10 neighboring local health departments covering nearly 60% of the state's population.

Los Angeles County, which has accounted for a third of all coronavirus cases and nearly 40% of deaths, urged people to avoid attending indoor religious services, even though they are permitted with social distancing requirements.

The Roman Catholic Archdiocese of Los Angeles was permitting limited indoor services, although it also urged churches to avoid them in favor of outdoor or online services.

The Cathedral of Our Lady of the Angels held Christmas Eve Masses and planned indoor Christmas Day Masses as well.

On Thursday, dozens of physically spaced worshippers removed their masks only to take communion at arms' length from clergymen. There was none of the singing that health officials warned could increase the spread.

Father David Gallardo held a copy of the children's book "How the Grinch Stole Christmas" in a midafternoon service as he taught that "darkness doesn't win," likening the coronavirus to the Grinch.

Amid the dire warnings were some rays of hope, which the governor said may indicate people are heeding pleas to social distance.

A statistical model that state officials have been using to project hospitalizations predicts more than 71,000 patients in one month's time. While still an unsustainable four times the current number of patients, the estimate is roughly 40,000 fewer than what the model had been projecting just days ago.

The transmission rate -- the number of people that one infected person will infect -- has been slowing for nearly two weeks, and it is nearing the point that would bring fewer infections from each person who contracts the virus.

In addition, the rate of positive cases reached a new high of 12.4% over a two-week period, but it was starting to trend downward over the last seven days from a peak of 13.3% to 12.6%. The seven day rate was 12.1% on Thursday.

"Let's virtually hug those outside of our immediate family," he said. "Let's stay close to those folks in our household."