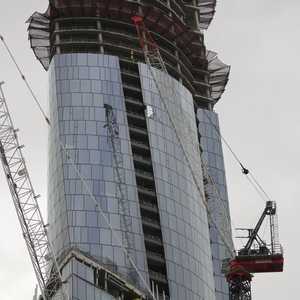 A crane has repeatedly smashed into the side of the $2.2 billion Crown Casino tower construction at Barangaroo this afternoon.

The spinning crane kept swinging around knocking into the 30-storey tower about 2pm today.

"At approximately 1.45pm today, as a result of strong winds, a tower crane hook struck and damaged one of the glass panels on the building facade at the Crown Sydney construction site," a spokeswoman for Crown Resorts said in a statement.

"The site was closed at the time, and nobody was injured," she said.

"A full safety review of the crane equipment is being conducted. Crown is committed to the safety of its employees, contractors and visitors."

Office workers watched on as the unsecured crane began swinging before it smashed into a window on an upper floor of the building which will house a casino and luxury apartments when it is completed.

HSBC officer work Carlos Gomez who works on the 37th floor of a neighbouring building said it was spinning for some time before it smashed the glass.

"We saw the crane it was completely out of control and it hit the window at least three times, it was scary," he said.

"That crane was spinning around for 15 or 20 minutes, and then we saw the banging there in the window.

"The same window three times, it completely smashed it."

Construction workers clocked off at 11.30am this morning after the heat hit 35C.

Divyash Subedi who also works in the neighbouring building said some people rushed out to secure the crane about half an hour after it first started.

"They were checking it ... it was seven or eight people," he said.

Mr Packer has purchased two apartment floors in the Barangaroo development, levels 48 and 49, for $60 million, and earlier this month toured the site on a rare visit from his bases in Aspen and Los Angeles in the US and his polo ranch in Argentina.

On Tuesday it was confirmed Mr Packer would be called to give evidence before the Independent Liquor and Gaming Authority's inquiry into Crown's Sydney licence and his deal to sell $1.75 billion in Crown Resorts shares to Hong Kong gaming tycoon Lawrence Ho.