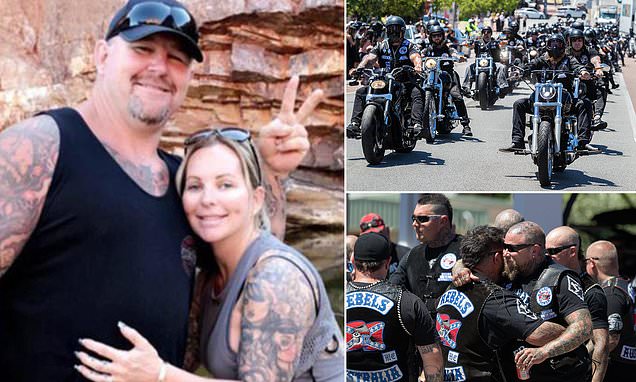 Five grieving bikies were kicked out of the Crown Casino in Perth following a rowdy night of commemorations after the former Rebels boss, Nick Martin, was laid to rest.

Martin, 51, was fatally shot in the torso while attending the Outlaw Nitro Challenge drag racing event at Kwinana Beach in Western Australia earlier this month.

A sniper is believed to have fired a single precision long-range shot at Martin in front of hundreds of horrified families and young children, including his wife Amanda and step-daughter Stacey.

More than 400 mourners including Rebels members paid their respects to their beloved friend at Martin's funeral on Wednesday.

While police braced themselves for a violent fallout between other bikie groups, Police Commissioner Chris Dawson said the only incident on Wednesday night was the eviction of the five men from the casino.

Nick Martin, 51, (pictured with wife Amanda) was fatally shot in the torso while attending the Outlaw Nitro Challenge drag racing event at Kwinana Beach in Perth earlier this month.

Pictures: Rebels bikies embrace at the funeral of Nick Martin in Perth on December 23

Commissioner Dawson, however, was unable to comment on why or when the bikies had been kicked out.

Police also attended up to 100 different bikie clubhouses and bars on Wednesday after the funeral came to a close and confirmed no other rival group members had attended the service despite tensions escalating after Martin's death.

A $1million reward is on offer for anybody with information into the 51-year-old's fatal shooting.

Commissioner Dawson revealed progress had been made into the investigation but could not provide any details.

While mourners were paying their respects on Wednesday, CCTV captured a thief jumping a fence to break into the home of Ms Martin's elderly parents in Rockingham in Perth's south-west.

A police source claimed up to $20,000 in cash belonging to Ms Martin was stolen from a safe inside the home.

Ms Martin said she believes the alleged thief knew her parents, aged in their 70s, wouldn't be home on Wednesday.

The widow also set the record straight about the stolen cash, which she says was inheritance money left by her grandmother for her grandchildren.

'I told mum to call the police when she got home and found the break-in and I told her to say she was my mum so they would hurry up,' Ms Martin told The West Australian.

There were incredible scenes on Wednesday as hundreds of bikies from the Rebels and other clubs formed an extremely long motorcade to farewell Martin before he was laid to rest at Pinnaroo Cemetery in Perth's north.

Ms Martin speaks at her husband's funeral at the same time that thieves stole $20,000 in cash belonging to her from a safe in a family friend's home in Rockingham

Pictures: Rebels bikies are seen at the funeral of Nick Martin in Perth on December 23

A massive police presence shadowed the bikies with a police marksman hanging out of a helicopter - as fears of an all out gang war grow in Western Australia.

At the front of the procession was four riders followed by a motorcycle carrying Martin's coffin, which had Australian $100 notes printed all over it.

The coffin-carrying motorcycle was flying the Rebels club 'battle flag' - a US Confederate flag with a cap-wearing skull and a one per cent patch.

In America the flag flown by southern states in the US Civil War from 1861 to 1865 is regarded as a lingering symbol of slavery.

Three black hearses then followed before giving way to two rows of motorcycles and a vintage black limousine.

Police cars and motorcycles could be seen at the back of the procession, slowing other traffic down to make room for the motorcade.

The procession began in North Perth at 10am before moving along the coast down to the Pinnaroo Cemetery where the service was held in the afternoon.

The mob of leather-clad outlaws rode down Scarborough Beach Road along the West Coast Highway under police escort, before heading to the Pinnaroo Valley Memorial Park.

A police sniper also kept a watchful eye on the procession from a helicopter as the patched gang members headed south to say their final farewells.

At the front of the procession was four riders followed by a motorcycle carrying Martin's coffin, which had Australian $100 notes printed all over it

Western Australian Police said it was the most significant and well-planned security operation in the state since the Commonwealth Heads of Government meeting in 2011.

Due to Covid restrictions, the funeral was capped at 500 and no visitors from New South Wales were permitted to attend due to the Northern Beaches Covid outbreak.

For those who couldn't be there, the service was livestreamed through Facebook.

Martin's daughter Tia fought back tears when she described her father as a 'teddy bear' and her 'rock'.

She also said that at times he may have had a 'slight temper on occasions'.

Others spoke about Martin's well-known love of food and the 'loyalty' he showed to his mates.

'He had a memory like an elephant,' a close friend said during a eulogy.

While police helped with the funeral procession, they earlier vowed to outnumber the bikies at the event.

'You really don't have anything to fear, police will outnumber everybody in the area,' Assistant Commissioner Brad Royce told reporters.

The brazen nature of Martin's execution which also injured another Rebels gang member and a five-year-old boy, who was sitting on his parent's lap nearby, has authorities desperately seeking answers.

But while police have focused their attention on local bikies one of Australia's foremost experts on outlaw motorcycle gangs said the brazen attack does not have any of the hallmarks of 'bikie activity'.

Mourners gather at a funeral parlour in North Perth before riding to the funeral of murdered Rebels bikie Nick Martin at Pinnaroo Cemetery in Perth, Wednesday, December 23

One of the possible shooter locations at the Perth Motorplex. A long shot would indicate a sniper, experts say

'If this was a dispute between clubs or an internal conflict within a club, it wouldn't have happened this way,' Queensland University of Technology associate professor of criminology Mark Lauchs told Daily Mail Australia.

'It would be a much more public confrontation or they would have ambushed him. It's not common to kill people in other OMGs over what they call - club business.'

He suspects a professional shooter from another organised crime outfit carried out the attack with an interstate assassin.

'Based on other cases in Australia where someone has been intentionally killed and not accidentally killed in a drive-by - it's usually associated with organised crime rather than OMGs,' Prof Lauchs said.

'It would be very unusual for an OMG to carry out this kind of attack.'

Prior to his death, Martin was a well-known identity in Perth's underworld and had survived a series of attacks.

He was shot in the arm while arriving at his Balcatta home, in Perth's northern suburbs, in March 2011.

At the time the Rebels were locked in a feud with the Rock Machine Gang and its member Benjamin Spikes was convicted over the shooting.

One year later Martin's Balcatta home was the target of another attack and his car was firebombed.

Martin was also allegedly involved in a brawl with a Hells Angels bikie at The Sandbar, in Scarborough, on November 24.

Security cameras filmed two men speaking with each other and shaking hands before a fight broke out involving staff and patrons at the trendy beachside bar.

Pub goers could be seen in the footage running away from the scuffle as furniture was tossed around the bar during the violent fight.

Daily Mail Australia is not suggesting the two incidents are linked.

Nick Martin pictured as a child. Mourners were shown intimate photos of him as a child at the funeral on Wednesday

Long before the slain bikie boss was a patched in member of the Rebels outlaw motorcycle gang, he was a fresh-faced boy with a sweet smile.

As part of the funeral service, mourners were shown intimate photographs of a time long before Martin became a tatted-up bikie.

The striking images show the softer side of the infamous former head of the Rebels.

Long before slain bikie boss Nick Martin (pictured) was a patched in member of the Rebels outlaw motorcycle gang, he was a fresh-faced boy with a sweet smile

Pictured: Feared gangster Nick Martin is seen when he was a young boy

But even as a child his love of motorcycles was apparent.

He can be seen siding a motorbike around a suburban yard and cheekily posing for a photo with another young child sitting on the back.

As well as photographs from his early childhood, the slideshow also included snaps of Martin as a teen and young adult.

Pictured: Martin is seen flexing his impressive bicep while sitting on the couch as a young man

Martin, in his younger days, is seen smiling as a young blonde woman embraces him

The shots reveal a clean cut young man world's away from the leather-clad enforcer he became.

But even after his identity was established a notorious underworld figure, the pictures show he still had a sensitive side.

Martin can be seen cuddling up to his pet dog and taking a young family member for a ride on a quad bike.

The high-flying bikie is also captured in a photograph with boxing legend Mike Tyson.