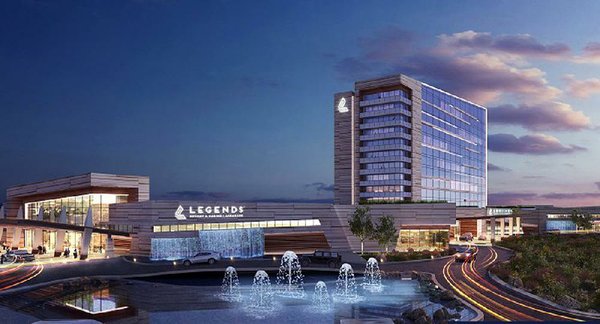 Oklahoma-based Cherokee Nation Businesses on Wednesday submitted to the Arkansas Racing Commission its third application for a license to build and operate a casino in Pope County.

A handful of representatives for Cherokee Nation Businesses delivered the application to the commission's office in Little Rock a day after Pulaski County Circuit Judge Wendell Griffen extended by 30 days his temporary restraining order barring the commission from issuing a license for a casino in Pope County.

Because of Griffen's original temporary restraining order, the commission voted Friday to ditch applications received during a second submission period, which ran from Aug. 19 to Nov. 18. During that second application period, Cherokee Nation Businesses of Catoosa, Okla., and the Choctaw Nation Division of Commerce of Durant, Okla., each submitted applications, then Cherokee Nation Businesses submitted an amended application. The Cherokees included the required endorsements of local elected officials, while the Choctaws didn't include them.

The first casino application period was in May and drew five applicants, which were all rejected by the commission because they lacked endorsements of current local officials. Those first applicants included Cherokee Nation and the Choctaw Nation.

Griffen said Tuesday that his temporary restraining order doesn't bar the Racing Commission from taking applications based on "good cause shown," as cited in its rules.

Chuck Garrett, chief executive officer for Cherokee Nation, said the latest application adheres to the commission's Rule 2.13.4(b), which allows applications to be submitted for the original May 2019 period but after the deadline "for good cause shown."

"We respectfully take the position that good cause exists for our application to be accepted by the Racing Commission and have asked that they do so as quickly as possible," he said in a written statement.

"In addition, we have requested that another [commission] hearing date be set in the near future during which we would make our formal presentation and the Commission subsequently vote on issuance of the license," Garrett said. "We remain confident and look forward to proceeding with our plans to bring Legends Resort & Casino Arkansas to the River Valley."

Griffen's temporary restraining order came in a lawsuit filed Aug. 27 by Citizens for a Better Pope County. The anti-casino group's lawsuit seeks a permanent injunction to bar the commission from issuing a license for any application submitted during the second application period.

On Jan. 3, Griffen granted the original temporary restraining order, saying the commission violated its own rules when it opened a second application period. That order led the commission to cancel a Jan. 6 meeting to decide whether to grant the license to Cherokee Nation Businesses.

Amendment 100 to the Arkansas Constitution allows a new casino in Pope and Jefferson counties and the expansion of gambling operations at racetracks in Hot Springs and West Memphis. Construction is taking place at the sites with the exception of Pope County.

The amendment, approved by voters in November 2018, requires the new casinos to have endorsements of local elected officials.

"We have worked diligently over the past year to listen to and collaborate with local officials, business owners and residents of Pope County in an effort to develop a project that promotes positive economic growth in the region and that the community can be proud of," Garrett said Wednesday in a statement.

John Burris, a spokesman for the Choctaw Nation Division, said Wednesday that the group isn't going to submit an application at this time for good cause shown.

"The Commission's role is to first define what constitutes 'good cause' under their rules. We respect that authority," he said in a written statement.

While Amendment 100 doesn't specify when the endorsements have to be dated or submitted, the Racing Commission last year added a rule that the endorsements can come only from local elected officials in office at the time the application is submitted. The Legislature and Gov. Asa Hutchinson enacted Act 371 of 2019, which became effective in March, to require the same thing.

Gulfside Casino Partnership of Mississippi was one of the five original applicants. The company filed suit in August, saying its application from May met the constitutional requirements because, unlike the others, it included letters of endorsement from local elected officials, though the letters were issued right before the officials left office in December 2018.

The Gulfside case is scheduled for a March 30 hearing before Pulaski County Circuit Judge Tim Fox.

Lucas Rowan, an attorney for Gulfside, said Wednesday, "We agree with the Racing Commission's recent decision to not take any action until the judicial process is complete."

The commissioners said Friday that they don't expect to act on a casino license application for Pope County at least until after Fox issues a ruling. Commission Chairman Alex Lieblong of Conway could not be reached for comment by telephone Wednesday afternoon.

Information for this article was contributed by Jeannie Roberts of the Arkansas Democrat-Gazette.