For former casino workers, food banks and pantries serve as a lifeline during the pandemic 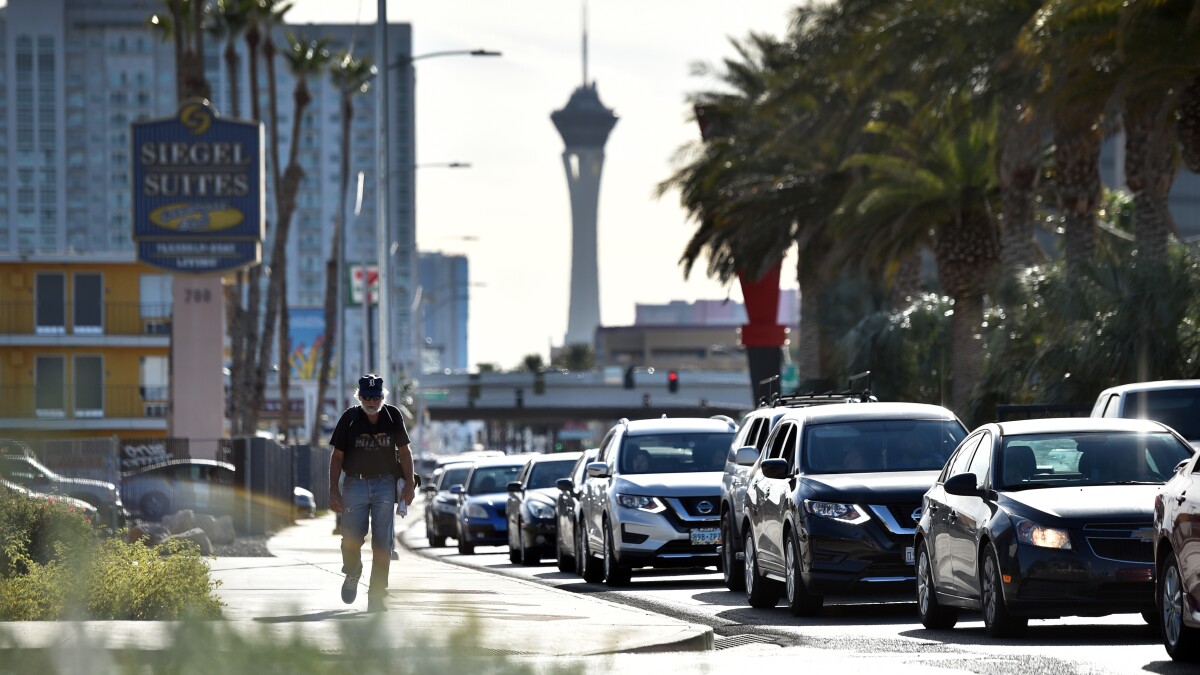 When the pandemic barreled through the glare and promise of this city, Cristina Lopez lost her casino job. She canceled family vacations. She quit her manicurist and nixed her monthly home security service. But then she found herself in a place she never thought she'd be: a long line at a food bank.

The pantry has become at once a mirror to her predicament and a lifeline for her family of six. The 36-year-old mother and her husband spend the bulk of their stimulus checks on their mortgage. Boxes of free food supplement the few groceries she can afford. Lopez tries to stay upbeat -- her dogs Panterita and Fluffy help. And she believes that one day -- although, like many around her, she cannot say exactly when -- the bad times will pass.

Lopez is among more than 50 million people nationwide who may go hungry this year due to the misfortune and joblessness brought by the COVID-19 pandemic. In southern Nevada, the number of hungry rose 20% in the last year. Social service organizations and nonprofits are scrambling to keep up with increased demand while juggling their own health concerns and reduced staffs.

Uncertainty threads lives as stimulus checks and unemployment benefits evaporate. This is America in the age of rising infections, failing businesses and the simmering dread that awakens people in the pitch of night. A mecca of capitalism and chance, Las Vegas is a cruel testament to the wide swath the pandemic and its economic consequences have cut through the lives of everyone from hotel housekeepers to airline pilots.

"I don't know what I feel," said Norma Flores, 54. "Sometimes I think probably my life was supposed to be done because I don't have work. I don't have anything."

Flores and her friend, Luceanne Taufa, were among thousands of Clark County residents who waited in line recently to pick up a frozen turkey and a box of fresh fall-themed food such as sweet potatoes, cranberries, onions, oranges and two different packages of stuffing during a food drive at the Cashman Center's parking lot.

A stream of vehicles, including Teslas, Range Rovers and BMWs, funneled through lines where workers greeted them and slipped food into trunks and onto backseats. Some were rerouted to a lower level lot for COVID-19 testing. By 3 p.m., the line of cars stretched past two blocks and obscured a freeway offramp. They would be there until dusk.

Flores thought she was beyond receiving such help. She relied on the Salvation Army decades ago when she was finding her way in her new home of Nevada. The single mother raised six children while working at Del Taco and El Torito restaurants. The paychecks improved 20 years ago when she started as busser and later became a waitress at Fiesta Henderson, a local casino and hotel near her home. She earned $22 an hour with tips. It was enough to live comfortably.

Now, one morning each week, she drives from the town of Henderson to the Culinary Academy of Las Vegas to pick up a box of free food with Taufa.

The food drive is one of several put on by nonprofits, unions and organizations throughout the state. The tourism industry alone employed 282,600 workers in the state during the 2018 fiscal year, according to the Nevada Resort Assn.

Nevada unemployment rate rose quickly in March, peaking in April with 30% -- 429,746 workers -- jobless, according to the U.S. Bureau of Labor Statistics. Although unemployment rates have since decreased, the number of people without jobs in September was still 134,756 higher than a year earlier.

The Nevada Gaming Control Board reported this week that the amount of money casinos won on all games and devices plummeted by 22.54% from July to October, a difference of almost $200 million from its 2019 fiscal year. In the heart of American capitalism, the Las Vegas Strip was hit the hardest out of all other areas in the state. Its gaming revenue fell 36.97%, losing over $800 million.

Women like Lopez, Flores and Taufa know the Las Vegas Strip is a disquieting echo of what it was before the pandemic. Throngs of tourists still show up, lured by the steep drop in hotel prices for stays at venues such as the Cosmopolitan and the Bellagio. Music still blares onto the street and neon lights and signs shine bright in the desert darkness.

But the allure of night clubs no longer draw lines wrapping around casino floors. Live shows sell out in advance because of its reduced capacity. Majority of stores inside shopping malls close early. Come night time, walking the strip and socially-distanced gambling are the only options. That shift in business has reverberated across the state.

More changes may be coming as coronavirus cases surge again. Gov. Steve Sisolak announced Wednesday a "statewide pause" expected to last three weeks. Under the new rules, residents and visitors must wear masks at all times. Restaurants and bars that serve food will operate at a limited capacity with reservations a requirement. Gaming operations will be restricted to 25% occupancy. Clubs, brothels and adult entertainment will remain closed.

During the first few months of drive-in food banks last spring, Scott said his staff was overwhelmed by lines six miles long with as many as 12,000 cars waiting hours for food. But like those it served, the organization faced its own problems as the virus spread. Two-hundred volunteers were let go, forcing other staff to prepare boxed meals.

"It hasn't been easy," said Scott. "I can tell you that not by any stretch of the imagination."

Demand was so high the extra truck loads of food had to be ordered. The nonprofit has since opened 16 sites to distribute food every week. While the need hasn't decreased, Scott said there are now a more manageable 350 to 400 cars at each site.

Taufa, 62, sits in one of those cars. A frugal woman, and the only breadwinner in her household, Taufa worked as a host and cashier at the café inside the casino. The job offered benefits that allowed her to take care of her sick husband. Sometimes she'd spend a little extra and treat herself to a good restaurant. Now, there's times she can't afford to pay her cell phone bill.

She and her husband cried the day she received the letter letting her know she would be out of a job for a long spell. It was May, two months after she was furloughed.

"I never thought people like me with a roof over their head would stand in line to get food," she said. "I'm thankful. At least something will be on my table."

Lopez feels the same way. It has been 10 months since the pandemic upended her life. She still gets that strange, melancholic feeling waiting in line for a box of food. But a lot must be done. In this city where luck is ephemeral, she talks of changing herself from the woman she knows.

She is practicing her English skills with her daughter's help. They're making holiday decorations with construction paper and balloons. And she's thinking about returning to school to become a nurse or medical assistant in hopes of no longer being at the mercy of the tourism industry.