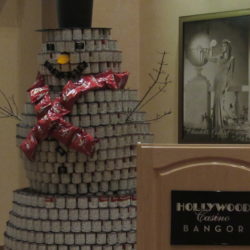 BANGOR -- Hollywood Casino is donating nearly 1,400 pounds of food to Good Shepherd Food Bank. The food comes from the holiday sculpture that was constructed around Thanksgiving and on display in the hotel throughout the holidays.

"What we find is that people tend to think of donating food to places, like Good Shepherd Food Bank, moreso around the holidays," said Austin Muchemore, general manager at Hollywood Casino Bangor. "Once the holidays are over, donations tend to decrease because charitable donations are not as 'top-of-mind' with people. But there continues to be a significant need for donations during winter months. There are families making the terribly difficult choice between food and fuel, so we are hopeful that our donation will help provide for those who are in need. We're also hopeful that it raises awareness for others to consider donating, as well."

The holiday sculpture at Hollywood Casino was a snowman constructed by Allison Strange, a graduate of the Master of Fine Arts program in Intermedia from the University of Maine. This is the 20th year that Hollywood Casino has worked with Strange to construct a piece of art out of non-perishable food that would later be disassembled and used for a donation.

"Good Shepherd Food Bank and our area partner agencies are thankful for Hollywood Casino's donation," said Melissa Huston, major gift officer at Good Shepherd Food Bank. "We are always grateful for anyone willing to donate food, funds and their time to fight food insecurity in Maine. There are so many ways to help out after the holiday season, hunger is 365 days a year, and we usually see a decrease in donations and volunteering during the first few months of the new year."

Hollywood Casino's donation is of more than 1,800 small cans and 120 family-sized cans of Campbell's soup, which provided the bulk of the makeup of the snowman sculpture. Other non-perishable items that are also being donated include two cases of coffee packets, which were used to create a scarf for the snowman, and some dark chocolate packets that created the snowman's "coal."

"Maine is a unique place," said Muchemore. "Mainers are tough and rugged in order to get through the winter. But, Mainers also have big hearts and will always step up to help each other out. That's why Hollywood Casino is making this donation and we're optimistic that others will do the same with food donations of their own."