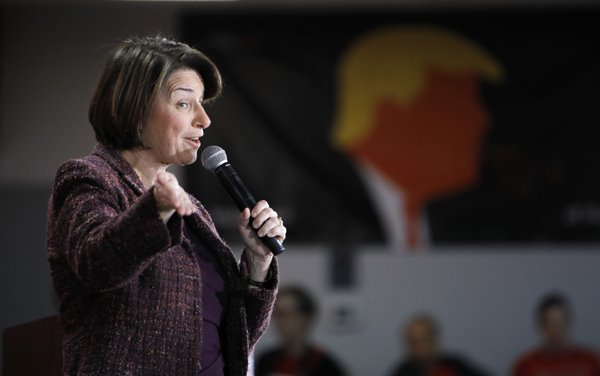 LAS VEGAS -- Democratic presidential candidates descended on Nevada on Saturday in an attempt to build relationships with Hispanic voters and win the coveted endorsement of the powerful casino workers' Culinary Union.

Amy Klobuchar and Pete Buttigieg, both running as Midwestern moderates who've warned against liberal plans to move the U.S. to a government-run health insurance system, on Saturday morning pitched themselves to the workers, who prize their robust health plans.

Klobuchar, a Minnesota senator, said the "Medicare for All" proposals like those put out by Sen. Bernie Sanders of Vermont and Sen. Elizabeth Warren of Massachusetts "might sound really good on a bumper sticker" but would cause millions of Americans to lose their current health insurance, including the plans the casino workers bargained hard for.

"All of that work, I don't want it to go down the drain," Klobuchar said during her appearance at the workers' union hall just off the Las Vegas Strip.

Buttigieg, who took the stage after Klobuchar left, made a similar point as he pushed his plan to offer government-run Medicare insurance to those who want it.

"I believe that if it's the best answer for everybody, well, then everybody will choose it anyway," said the former mayor of South Bend, Ind. "I trust you to make the right decisions."

Visits from Klobuchar, Buttigieg and former Vice President Joe Biden came a little more than a month before early caucus voting starts in Nevada, the third state to weigh in on the primary race.

Biden has maintained a top spot in Nevada polls. In the most recent poll of the state, released Thursday by Fox News, he has a slight lead over Bernie Sanders, followed by Warren and Tom Steyer, with Buttigieg trailing slightly. Klobuchar, who has only recently ramped up her campaign in Nevada, has been polling in the low single digits.

Nevada, considered the first state to test a candidate's appeal before a diverse population, is a minority-majority state that's about 29% Latino. Hispanic voters are a key constituency for Democrats in the state, along with labor unions.

While a number of unions are big players in Nevada Democratic politics, none reigns supreme like the Culinary Union. The 60,000-member group is majority-female and majority-Latino and has won worker protections and comprehensive health plans from the biggest industry in the state.

Biden, Warren and Sanders all made their pitches to the union in December. While Warren sidestepped discussion of her Medicare plan to move the country away from private insurance, Sanders took on the issue directly and was heckled by some in the audience.

But all three of those candidates, who are much better known, received more enthusiastic receptions at their earlier visits than Klobuchar and Buttigeg did Saturday.

Klobuchar told jokes and touted her family's long union membership as she warmed up the crowd. Buttigieg drew whoops and claps as he broke into Spanish several times.

Michael Bloomberg on Saturday did not rule out spending a billion dollars of his own money on the presidential race, even if he does not win the Democratic nomination, and said he would mobilize his well-financed political operation to help Sanders or Warren win in November if either is the party nominee, despite their sharp policy differences.

Bloomberg's plans would effectively create a shadow campaign operation for the general election, complete with hundreds of organizers in key battleground states and a robust digital operation, ready to be inherited by the party nominee -- regardless of who that may be.

Already, Bloomberg has spent more than $200 million on advertising, putting him on pace to spend by early March about what former President Barack Obama's campaign spent on advertising over the course of the entire 2012 general election. If Bloomberg fails to win the nomination, future spending is to be redirected toward attacking Trump.

"It depends whether the candidate needs help; if they're doing very well, they need less. If they're not, they'll need more," he said in an interview after a lunch stop at a barbecue restaurant during a campaign swing through Texas.

While he did not rule out dropping $1 billion on his effort, the former mayor of New York City blanched slightly at the size of the number, before mentioning the $2.8 billion he spent on charitable contributions last year, with the bulk going to his alma mater, Johns Hopkins University.

Information for this article was contributed by Lisa Lerer of The New York Times.