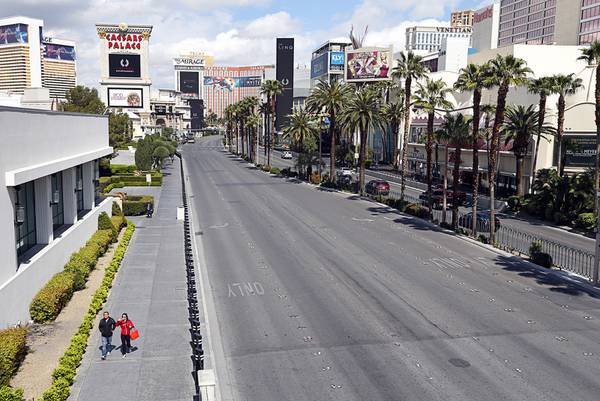 It was a surreal moment for Andrea Henderson as she watched the slot machines power down at the Bellagio. At the same time, people were still scurrying about, trying to buy in at the blackjack tables as half the casino was shut down.

Henderson, a floor supervisor, has worked at the Bellagio for 22 years, since the day it opened. She never thought she'd see the day it closed, let alone every casino in the state.

But parent company MGM Resorts International announced Sunday that it would suspend operations at all its Strip casinos on Monday and close its hotels on Tuesday because of the coronavirus outbreak. Two days later, Gov. Steve Sisolak ordered casinos statewide to close for 30 days.

Henderson has been paying attention to the virus since it first appeared in China in December and ended up forcing a 15-day closure of casinos in Macau last month.

Then it happened. "This is not a joke anymore. It was never a joke," Henderson said.

The American Gaming Association estimates 616,000 casino employees in the U.S. are out of work because of casino shutdowns. Some 95% of the country's 465 commercial casinos and about 75% of 524 tribal casinos have been closed, the trade group said.

MGM Resorts International is providing two weeks of pay for its employees and extended health benefits. And Henderson remains optimistic that she won't be out of work for more than a month.

"So many people are greatly affected by this; they will not let Las Vegas go to sleep for longer than a month. I just don't believe it," she said.

How long the shutdown lasts will likely depend largely on the course the virus takes, medical experts said. In Clark County as of Friday, 126 people have tested positive for coronavirus, where two people have died.

"If at the end of the 30 days the situation has gotten much, much worse, then obviously we'll have to extend it," said Dr. Brian Labus, epidemiology expert at the UNLV School of Public Health. "If we get closer to 30 days and everything is better, we'll look at how to modify it. It's a place to start, but obviously because we don't know how this will play out, it's hard to say exactly how many days it will be and whether or not it will be enough."