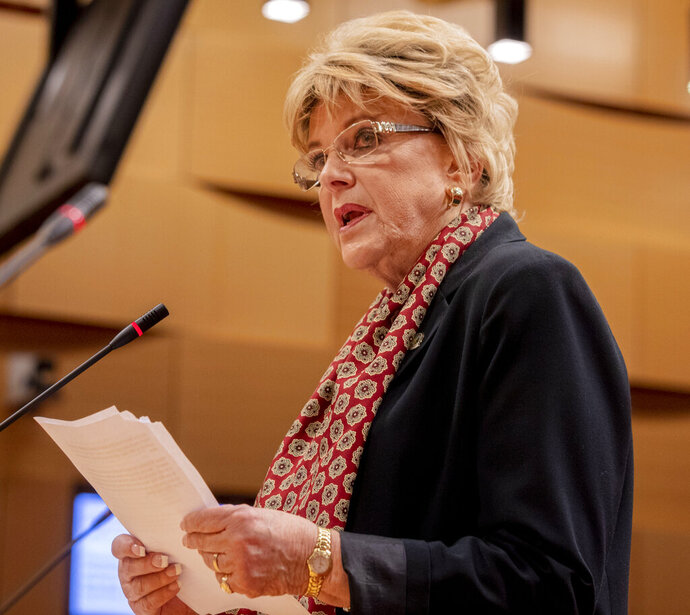 FILE - In this March 18, 2020 file photo Las Vegas Mayor Carolyn Goodman delivers a public statement during a public meeting at the Las Vegas City Hall Council Chambers, in Las Vegas. Goodwin is bucking closures as the new coronavirus outbreak spreads, calling for Nevada's governor to cut in half his order shutting the state's casinos for at least 30 days. Gov. Steve Sisolak responded strongly Friday, March 20, 2020, without naming Goodman. He said elected officials have to understand the severity of the situation and become part of the solution.

FILE - In this Tuesday, March 17, 2020 file photo Nevada Gov. Steve Sisolak speaks during a news conference at the Sawyer State Building in Las Vegas. Sisolak on Friday, March 20, 2020, followed governors of states including California, New York and Illinois in imposing near-lockdowns on restaurants and other businesses to keep millions of people inside except for essentials and exercise.

LAS VEGAS (AP) -- While Nevada's governor joined other U.S. officials invoking extraordinary measures to reduce the spread of the coronavirus, the mayor of Las Vegas is pushing back against a shutdown of the casinos that power the city and the state economy.

Governors in California, New York and Illinois have ordered millions of people to stay in their homes except for essentials and exercise, while Nevada Gov. Steve Sisolak and other leaders around the country have told restaurants and other businesses to shut down.

Las Vegas Mayor Carolyn Goodman became an outspoken outlier by declaring that her city should be allowed to stay open for business. Nevada has tallied two deaths and more than 100 cases of COVID-19, almost all in the Las Vegas area.

"Our economy depends on tourism and being open for dining, entertainment, gaming, sports," Goodman said in a prepared speech before the Las Vegas City Council.

She spoke just hours after Sisolak ordered the state's always-open casinos to shut down for at least 30 days -- the longest period since gambling was legalized in 1931.

"Very many" people among the 2.2 million in and around Las Vegas live paycheck to paycheck, said Goodman, a three-term mayor and political independent who also serves on the board of the powerful Las Vegas Convention and Visitors Authority.

She called for the Democratic governor to cut the length of the closures in half.

"I know we, they, cannot survive any total shutdown of the economy ... beyond the immediate week or two," Goodman said.

Sisolak responded strongly Friday, while adding enforcement measures to his closure of businesses such as bars, restaurants, salons and gyms.

"Your life and the life of your neighbors and family members will always be more valuable to me than the perceived and mistaken economic gain we have by cutting this isolation period short or by waiting one more day to get serious," Sisolak said. "I am not asking them anymore. I am telling them they must close their doors or they will face the consequences."

"Elected officials," he added, should "understand the severity of the situation they are facing and become part of the solution."

Las Vegas is all about glitz and gatherings -- the very "auditoriums, stadiums, arenas, large conference rooms, meeting halls and cafeterias" that Sisolak said people must avoid to meet federal guidance for keeping people apart to prevent spreading the virus.

Goodman, who complained during a tourism board meeting this month that media coverage of the outbreak was hurting business, declined to be interviewed by The Associated Press.

Las Vegas is not like New York, Los Angeles or San Francisco, she said in her prepared comments to the City Council. Shutting down businesses for more than two weeks will cause "untenable hardship."

"Forty-two million people come to us every year as tourists," Goodman said. "Our own 3 million Nevadans depend on the income from that tourism."

Indeed, the American Gaming Association said Thursday that more than 205,000 casino employees have been idled statewide due to closure of 219 commercial casinos. The group said a 30-day shutdown could cost $4.7 billion in lost economic activity.

In a state where gambling taxes are second only to sales taxes in state revenue, Las Vegas-area casinos generated 85% of the statewide total of $708 million in gambling taxes in fiscal 2019, according to regulators. Nevada has no personal income tax.

But in contrast to Goodman, Reno Mayor Hillary Schieve was ahead of Sisolak, calling for a 30-day closure of bars, restaurants and other nonessential businesses in northern Nevada's largest city.

In Arizona, Phoenix Mayor Kate Gallego joined counterparts in the cities of Tucson, Flagstaff and Mesa in ordering bars and gyms to close and restaurants to offer only takeout service, though Gov. Doug Ducey hasn't issued a statewide order for nonessential businesses to shutter or people to stay home.

In Nevada, almost three-fourths of positive cases of COVID-19 have been in the Las Vegas area. Officials say they expect more will be detected with more testing.

Most patients exhibit mild or moderate symptoms, but severe symptoms including pneumonia can occur, especially among the elderly and people with existing health problems. The vast majority recover.

Goodman, who turns 81 next week, underwent treatment last year for breast cancer. She has remained at work in the office that she first won in 2011, succeeding her husband, flamboyant former three-term Mayor Oscar Goodman.

Copyright 2020 The Associated Press. All rights reserved. This material may not be published, broadcast, rewritten or redistributed without permission.

Stay up-to-date on the latest in local and national government and political topics with our newsletter.