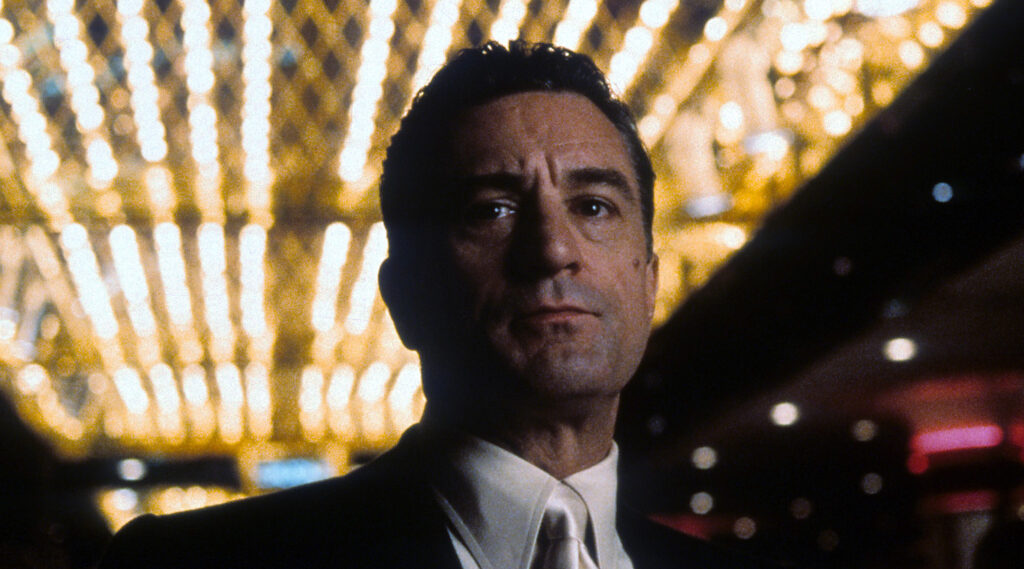 It may be a tick below "Goodfellas," which came out just five years earlier, in terms of its reputation in the eyes of film historians. But the three-hour epic remains one of Scorsese's most ambitious and gorgeously realized films. It also may be the best crime film with a Jewish protagonist at its center.

That was Sam "Ace" Rothstein, the character played in the film by Scorsese mainstay Robert De Niro. Rothstein is depicted as a Jewish associate of the Chicago Outfit, an expert bookmaker and sports handicapper who is sent to Vegas to run the Tangiers, one of the largest casinos on the Strip. The character is based on Frank Rosenthal, a real Jewish gambling expert from Chicago who had ties to the Chicago Outfit and eventually headed to Vegas to run casinos for them.

While the film is somewhat fictionalized, Rosenthal really did pioneer the idea of sports books in casinos, really did survive an assassination attempt by car bomb and really did have his license denied by a state gaming commission, which was led in real life by Harry Reid, before he was a senator.

Rothstein, as depicted in the film, is sort of a gangster, and sort of not; he is with the mafia, but not of the mafia, because of his ethnic identity. Like Henry Hill, the protagonist of "Goodfellas," Rothstein can't ever be a "made guy" because he's not fully Sicilian.

However, Ace sees his work running the casino as having a certain degree of above-board legitimacy and is constantly worried that his longtime friend Nicky (Joe Pesci), a fully "made" mobster, is ruining that reputation with his loose cannon antics.

In the film, the viewer never hears Rothstein himself address his Jewishness or what it means to him, and he appears to lead a largely secular life. The topic is mentioned, however, by Pesci's character, in a somewhat pejorative way.

"I gotta make sure no one f***s around with the golden Jew," Nicky says at one point. As their relationship begins to sour, he says things like "Jew motherf*****," and threatens to "take a piece out of your Jew ass."

In the end, Rothstein is the perfect symbol of how Jews could find great success in mid-20th century America -- even in the crime world -- yet remain outsiders, through no fault of their own.

After Frank Rosenthal's death in 2008, it was revealed that he had long been an FBI informant. In an interview prior to his death, Rosenthal was asked whether his heritage protected him while dealing with underworld figures.

"No, when you excel at anything -- my expertise was sports and thoroughbred wagering -- you rise to a very high level," he said. "Some people were impressed and took special notice that I could beat the odds. To have recognition, in my judgment, opened certain doors for me. It put me in a semi-celebrity category."

Another fact surrounding the Rothstein character is that he was portrayed by the non-Jewish De Niro -- something that could have raised eyebrows today. Of course, this can go the other way, too: Actor James Caan has said in interviews that he's had to turn down "Italian-American of the Year" awards multiple times because even though he played Sonny Corleone in "The Godfather," he is in fact the son of German Jewish immigrants.

Rothstein is far from the only major Jewish character in the canon of American gangster movies. Here's a quick recap of some of the others:

-The "Godfather" movies featured a pair of prominent Jewish gangsters, both allies-turned-antagonists of the Corleone Family: Moe Greene (Alex Rocco) in the first film, and Hyman Roth (Lee Strasberg) in the second. The two men were based, respectively, on real-life Jewish gangsters Benjamin "Bugsy" Siegel and Meyer Lansky. Roth, like Lansky, would even seek political asylum in Israel -- "I wished to live there as a Jew in the twilight of my life."

Hyman Roth, according to a deleted scene in "The Godfather Part II," was originally named Hyman Suchowsky -- but the character changed his name out of admiration for the real-life Jewish gangster Arnold Rothstein (not to be confused with the fictional Ace), later shortening it to Roth. "I've loved baseball ever since Arnold Rothstein fixed the World Series in 1919," the character says in the film.

-Hollywood has offered plenty of other depictions of all three of those real-life gangsters. Bugsy Siegel was played by Warren Beatty in the 1991 biopic "Bugsy," which Beatty also directed.

-Michael Lerner played Arnold Rothstein in "Eight Men Out," John Sayles' 1988 movie about the fixing of that same 1919 World Series.

-None other than Joe Pesci played another Lansky stand-in named "Mayakofsky" in the 1983 film "Eureka," while Dustin Hoffman was Lansky in the 2005 drama "The Lost City," a film that covered the gangster's adventures in Cuba. Richard Dreyfuss played Lansky in a 1999 HBO movie "Lansky," which was written by Jewish playwright David Mamet.

-Harvey Keitel, who is Jewish and is another veteran of Scorsese gangster pictures, is set to play an aging version of Lansky in an upcoming biopic, also called "Lansky." That film is being directed by Eytan Rockaway, whose father Robert wrote a book in 1993 called "But He Was Good to His Mother: The Lives and Crimes of Jewish Gangsters."

-There have been many fictional Jewish gangsters as well. For example, in 1990's "Miller's Crossing," written and directed by the Coen brothers, John Turturro played bookie Bernie Bernbaum, about whom it is said "he's got a mixed reputation, but for a sheeny, he's got a lot of good qualities." "Sheeny" is an anti-Jewish slur from the 19th century.

-In the 2006 crime drama "Lucky Number Slevin," Ben Kingsley played a crime boss who was also a rabbi, and was called simply "The Rabbi." The current season of the FX TV adaptation of the Coen brothers' film "Fargo" features a character known as "Rabbi Milligan," played by Ben Whishaw, who was traded among different ethnic crime families. One of those is the Jewish outfit known as the Moskowitz Syndicate.

-And on "The Sopranos," there was Herman "Hesh" Rabkin (Jerry Adler), a veteran Jewish gangster and longtime associate of the Soprano family. In one episode, Christopher Moltisanti warns that an upcoming sit-down involving Hesh is likely to be a tough negotiation, because "I've heard his opinions on giving back pieces of Israel." Adler also guest-starred on an episode of "The West Wing" as the father of Richard Schiff's character Toby Ziegler, who was estranged from him due to his long-ago involvement with the Jewish organized crime group Murder, Inc.