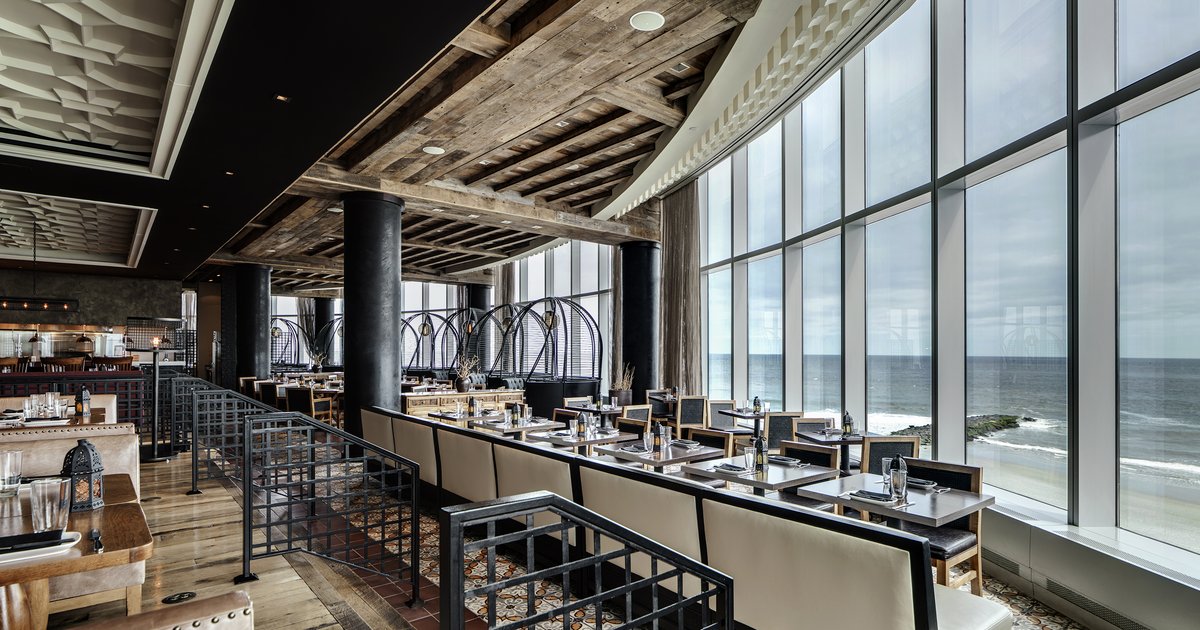 This view from Amada in the Ocean Resort Casino in Atlantic City. The Jersey Shore location of Jose Garce's Philadelphia restaurant is among the casual and fine dining options the casino hopes will attract guests.

Revel seemed like the white elephant of Atlantic City casinos when it closed in September 2014.

The fourth tallest structure in New Jersey had shuttered after only 17-months, leaving the future of the quirky casino, which cost a staggering $2.4 billion to build, in question: Could the curiously constructed casino ever work?

"Revel is the worst-designed building I've ever seen," Philadelphia and Atlantic City developer Bart Blatstein said. "There are so many reasons it failed. How can you have a casino on the Boardwalk and not be able to enter it from there?"

Revel was built with the casino on the sixth floor and the hotel lobby on the 11th floor. Blatstein owns the neighboring Showboat and the Playground. He and many other investors passed at the chance to buy Revel.

After several tumultuous years for the property, Revel was sold to AC Ocean Walk for $200 million and renamed Ocean Resort Casino in January 2018.

Ocean Resort's CEO Terry Glebocki, the only woman who is chief executive officer of an Atlantic City casino, has revamped the property. The vibe at Ocean has changed since it reopened in June 2018. It's hipper and more family friendly. There are casual restaurants along with a number of upscale restaurants - like Amada, the Jersey Shore location of Jose Garces' Philadelphia mainstay and a classic steakhouse, American Cut.

More events are being booked at the resort's Ovations Hall and on the beachfront for the summer. It's a contrast from Revel, which seemed to ignore what might be best for guests.

For 23 years, Glebocki was the vice president of finance for some of Donald Trump's Atlantic City casino operations, prior to taking the same position at Revel in 2007 and then becoming Revel's chief financial officer in 2013. She recalls what it was like at Ocean Resort Casino a few short years ago.

"The property had a history of being tone deaf to most A.C. customers and we've overcome that," Glebocki said. "We were voted No. 1 casino in A.C. (in 2019 by Atlantic City Press) for best rooms, best comps and best players clubs. That's because of what we stand for, giving people a fair deal."

Perhaps the most significant addition is the tranquil and soothing Exhale Spa + Bathhouse. "Exhale was recently voted the top spa in New Jersey by Spas of America," Glebocki said."What sets us apart from our competition is our Turkish style co-ed bathhouse and Himalayan Salt Grotto. It's an oasis."

Glebocki was hired as Ocean's chief financial officer in February 2019. Then she was named interim CEO in August, taking over for the casino's previous interim CEO, Eric Matejevich, before Glebocki's job became permanent in December.

She is confident at the helm and is proud to be a trailblazing woman in Atlantic City. "It's important to have diversity in the workplace in any industry," Glebocki said. "Men, women, young, old. Diversity gives a wide array of ideas and helps tackle difficult problems. It's an exciting time for me and the company. I joined the team as CFO and worked very hard to right the ship."

The Lehigh University alum is planning changes for 2020. "We will be enhancing and adding new gaming experiences for our guests," Glebocki said. "We are planning a major investment in a new high-limit slot experience that will position Ocean as a premier gaming destination in Atlantic City. We are also in conversations with our business partners in providing even more amenities and services that will wow our guests."

Expect more shows to be booked at Ovation Hall. There were 42 dates booked in 2019. Glebocki expects more than 60 events for 2020.

Glebocki hopes the nearby Orange Loop - an area in Atlantic City named for the orange streets in the board game "Monopoly" that today is being redeveloped with clubs, shopping and restaurants - will add traffic to Ocean.

"The Orange Loop attracted a younger demographic to the area," Glebocki said. "All development, large or small, is good for our area. Atlantic City, a beachfront community, offers many opportunities for new development."

Ocean Resort, Glebocki believes, is making progress in a competitive market that is perhaps turning the corner.