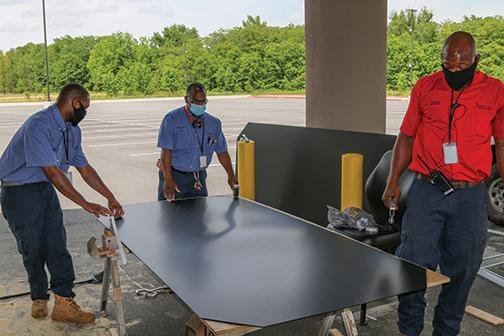 "I looked at all across our country, and what some of the leading experts on covid-19 are saying is that we are reopening because of the economy, too fast," Whitfield said. "I've always been straightforward that I've supported the casino. I voted for it, the whole nine yards, but taking what the experts are saying into consideration has led me to believe that if we open the casino now, we're going to create our own hot spot."

Whitfield said he fears that the casino, because it is a draw for tourism, could attract people from other areas of the state and from other states where the virus is still spreading rapidly, which he said could raise the possibility of increased community spread of the covid-19 disease in Pine Bluff.

"People will come from other places and bring in their resources and their funds, that's true," he said. "But now when they come in, along with their funds, they'll be bringing their germs, including covid-19, and people who go there will pick it up, take it home, and spread it to their loved ones. We need the revenue, but not at the expense of the lives of our people and our children."

Casino officials said Friday that they have been in close contact with state and local officials and have submitted a plan for reopening based on guidelines from the Arkansas Department of Health that they believe will help safeguard the health and safety of casino patrons and employees alike.

"Last week we provided the state with an extensive operational plan, focusing on guest and team member safety," John L. Berrey, chairman of Saracen Development and the Quapaw Nation, said in an email. "Today we received notification from the Arkansas Department of Health that our COVID-19 protocols were approved. Our team will closely monitor this phased reopening, and will remain in contact with [Health] Secretary Nate Smith and his team for their continued guidance and leadership. We will open Monday, May 18 at 10 am, with reduced capacity, limited hours, masks required, an emphasis on social distancing and a whole host of other new procedures."

"I would imagine that the city is anxious for the tax revenue the annex brings in," Saffa said. "Of course it's a balance. Public safety and the economy is a balance that every decision-maker in America is weighing right now."

In that same time period, the casino paid $2.886 million in taxes to the state, county and city. In the two months that the annex has been closed, the cost, according to those figures, has been $8.4 million in lost revenue to the Quapaw Nation and more than $1.1 million in lost tax revenue.

On Friday, the Arkansas Department of Health website reported that Jefferson County had 310 covid-19 cases, 184 recoveries and 19 deaths.

Saffa said that, revenue considerations aside, the casino is following stringent protocols in an effort to ensure it does not wind up being a driver of new infections.

"We believe that we can open under a responsible best practices metric, and we plan to open Monday morning," he said.

On Friday, workers from Downstream Development were busy constructing barriers to place between slot machines, and a number of the machines had been taken offline.

Saffa said some of the other measures put in place for the time being include limiting the hours of operation from 10 a.m. until midnight Monday through Thursday, and 10 a.m. until 2 a.m. on Fridays and Saturdays; and leaving the Q-store closed until further notice. Before, the casino was open 24 hours a day, seven days a week. He said patrons will be screened for fever and questioned about any illnesses or contacts with anyone believed to have been infected with covid-19, and capacity will be capped at 268 patrons and 30 employees at one time, which is about one-third of capacity.

"We'll have hand sanitizer stations set up throughout the casino, and employees will be disinfecting the slot machines behind every patron," he said.

But Whitfield, the City Council member, said he fears those restrictions may not be enough.

"If they wait for another 30 days, I think that will put them closer to the big casino opening up," he said. "Now, what happens if they go ahead and open it up Monday and in 30 days we have this huge increase [in coronavirus infections]? They're promoting the opening of the big casino, and now that would have to be delayed. I'm just saying because our community and our restaurants are starting to open up, so let's see how that goes."

VIEWS FROM THE COUNCIL

Support for Whitfield's resolution on the council Friday was thin at best. Of the seven other council members, only two, Bruce Lockett and Lloyd Holcomb Jr., voiced support for the resolution.

"I support it," Lockett said. "It's just a resolution to encourage them to delay the whole thing. I know the governor has given the green light and some directives about how they should open, but I don't think it's a one-size-fits-all solution. I think we should use caution."

"I want to support the well-being of the citizens," he said. "I don't think that 30 days is asking too much. I think it's still too early right now."

But other council members disagreed. Win Trafford said that framing the argument as putting profits before people is disingenuous at best.

"There's got to be a balance in there somewhere," he said. "The people take care of the economy and the economy takes care of the people, so what do you do? We have to strike a balance. It's not fair to say that everyone is opening back up because we don't care about the people. Opening up is about people."

Trafford said the situation will be closely monitored and that if any uptick in cases is recorded, action can be taken.

Council Member Joni Alexander said singling out one business over any other is unfair, even though the casino is a tourist-driven business.

Council Members Glen Brown Jr., Steven Mays and Donald Hatchett all said that, as of Friday, they did not support the resolution.

"From the beginning of our monitoring of covid-19, we have gone strictly by the governor's directives," she said. "[Allowing casinos to open] was a directive that came from him. It wasn't given just for Pine Bluff, but for Oaklawn and [Southland] as well."

Washington said she had been in contact with Berrey and other casino officials and is confident that the protocols being put into place will be effective.