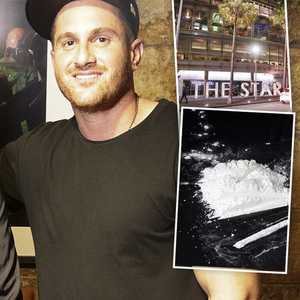 A real estate agent who was busted on camera using his car keys to snort cocaine at Sydney's The Star casino, has been spared jail.

Nabih Hadid, also known as "Narz", was caught with a friend on CCTV by security officers at the casino as he sat on the outside gaming floor on a poker machine with cocaine on November 30 last year.

"The CCTV showed the accused with the other male removing a clear resealable bag of white powdery substance from his grey side satchel with his left hand," according to police facts.

"The accused opened the same bag with both of his hands. The accused takes a set of keys from the male next to him and places the metal tip of the key into the same bag."

Hadid, 36, - who was found with 0.35g of cocaine - then "sniffed white powder into his nose" at 9am in the morning before security at the casino alerted police to the live streaming incident.

When officers arrived and began walking towards Hadid, police described him as "fidgety" and was "avoiding contact" and "appeared unsteady on his feet, his pupils were dilated in a well lit area".

"The accused was escorted to a private area away from the gaming floor and was told to keep both hands interlocked in front of him," police facts read. "Inside of the grey satchel police located a small clear resealable bag of white powdery substance .... Police asked if he knew the resealable bag was in his bag to which he stated 'no'."

Earlier this month, Hadid pleaded guilty at Downing Centre Local Court to the possession of a prohibited drug and was sentenced today to conditional release order for 9 months.

"You may as well have put a target on your head and said come and get me."

Magistrate Antrum also warned Hadid, who was in jail in 2018, that if he did not change his lifestyle of drug use, then he would be "going on a quick slippery side back to prison".

On January 23 this year, officers attached to the Sydney City Proactive Team targeting the supply of prohibited drugs on Liverpool and George streets arrested Hadid again while he was out on bail.

"The accused was observed to exit Meriton Apartments in the company of another female whose details are known to police," police facts read.

"The accused and the female were observed to speak closely with each other while walking hastily towards "The Century Bar '' located on the corner of George street and Liverpool Street."

The pair stayed at the bar for a short time before returning to the apartment and then back to The Century Bar where police arrested a "shaky" Hadid at the poker machine inside the venue.

"The accused was extremely nervous and agitated. He appeared dazzled and asked the police 'what did I do?'," police facts read.

When questioned about the tablets, Hadid "changed the story several times" before admitting they were his tablets but did not have his doctor's prescription on him.

Six tablets of valium were also found in the side bag.

Officers also searched a brown Louis Vuitton luggage back at the apartments where they found a black and green flick knife inside.

But Hadid - who denied owning the items - came undone when police found a 'Patek Philippe Geneve' box inside the Louis Vuitton bag that belonged to the watch Hadid was wearing at the time he was arrested.

Police said the Meriton apartments on Liverpool Street are well known to them to be frequented by people for the purpose of supplying, purchasing, and using prohibited drugs.

Hadid has previously been charged with a number of serious offences including breach of bail, deal with property proceeds of crime less than $100,000 and cause grievous bodily harm to person with intent.