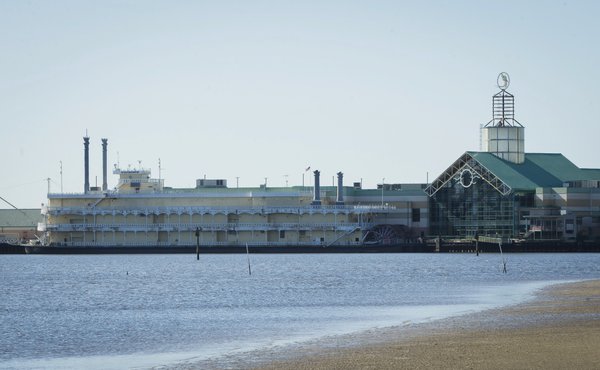 The Gaming Control Board approved the application from the owners of a Lake Charles-area riverboat 18 months after the Legislature decided that state-regulated casinos outside New Orleans don't have to stay on the water.

Eldorado Resorts plans a new $112.7 million casino between the parking lot and hotel for the Isle of Capri riverboat in Westlake, The Advocate of Baton Rouge reported.

The new casino approved earlier this month will be nearly triple the size of the riverboat. That will allow nearly 120 more slots, seven more tables, a VIP lounge and the only restaurants overlooking the lake.

The application from Eldorado Resorts, a company headquartered in Reno, Nev., will set the precedent for the other 14 riverboats, which all are looking to move ashore, said gambling board chairman Ronnie Jones.

He said several have taken initial steps, with the Treasure Chest Casino in Kenner possibly the furthest along.

"This is a game changer," said state Sen. Ronnie Johns, R-Lake Charles. He was chief sponsor of the law allowing casino companies to scuttle the riverboats and move to land within 1,200 feet of the waterway where they are licensed to operate.

When lawmakers legalized gambling 25 years ago, Harrah's Casino in New Orleans was the only one allowed on land. The others had to be on riverboats, with gambling allowed only when the boat was sailing.

The first of those rules to go was the requirement to sail. Since then, The Golden Nugget Casino Resort in Lake Charles filled a slough with its gambling floor.

Casino owners and state officials hope moving to land will reinvigorate stagnant and even falling revenue for the state's largest taxpayers. Louisiana took in $715 million in gambling taxes, and about $712 million in severance and other mineral-related taxes for the fiscal year that ended June 30. Economists earlier estimated that this fiscal year's riverboat casino revenue would be down $8.6 million to $12.8 million from last year's.

The law requires riverboats to provide "economic development" justification to move on land.

That meant expansion such as pools, spas and entertainment that would attract more customers and financing.

"It's not all about putting money in slot machines. It's about the experience," said board member Julie Berry, a certified public accountant from nearby Jennings. She said she doesn't gamble, but she would go to the new Eldorado casino for dinner by the lake.

Nongambling amenities, such as fine dining, will increase the number of customers and pull in almost as much revenue as are collected from slot machines and craps tables, he said.

Carano expects to start construction by the end of January and employ about 300 construction workers. The project should finish in May 2021.

About 22 employees will lose boat-related jobs, but the total number of workers should rise by nearly 70, from 735 to 804 when the casino moves ashore, according to the plan.