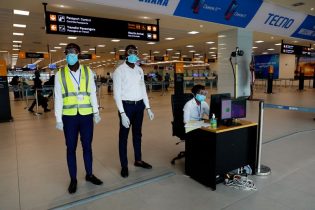 NEW YORK (Reuters) - As travel and casino stocks reel from concerns over the coronavirus outbreak, some value-focused investors are betting the declines will not last.

British Airways has suspended flights to mainland China and economists have warned of a major impact to the world's second-largest economy, as deaths from the flu-like virus stood at around 170 Thursday. The number of visitors to Macau, the world's largest casino hub, has fallen by 69% since Friday, according to the local government data released this week.

Fund managers say outbreak concerns have only exacerbated pressure on these stocks, which had already been hit by the trade war between the United States and China. Fears of a widening health crisis have sent shares of companies such as Las Vegas Sands Corp (LVS.N) and Booking Holdings Inc (BKNG.O) down more than 8% since the start of the month. Short interest in both companies is well below their 52-week highs, a sign that fewer investors see deeper declines ahead.

"They really are a slave to headline risk right now," said Charles Norton, a co-manager of the Vitium Global Fund. "We think there's a lot of value here."

Norton is increasing his position in companies with high exposure to Macau, such as MGM Resorts International (MGM.N) due to the rising consumer class in China and infrastructure improvements that will make it easier for mainland Chinese to travel to the region.

Shares of the company are down 7.6% since the start of the year and trade at a forward price to earnings ratio of 21, slightly below that of the broad S&P 500, according to Refinitiv data.

Bryan Engler, a senior equity analyst at Kovitz Investment Group in Chicago, said his firm is bullish on online travel sites such as Expedia Group Inc (EXPE.O) and Booking Holdings, which have faltered on concerns that worldwide travel will slow yet have strong balance sheets and high returns on capital.

"There's a piece of me that hopes there is a little more volatility. These are the type of businesses we love and we would love to buy them cheaper," Engler said.

Eric Marshall, a portfolio manager at Dallas-based Hodges Capital, said that his firm is increasing its position in Delta Air Lines Inc (DAL.N) and Norwegian Cruise Line Holdings Ltd (NCLH.N). Shares of Delta are down 4.7% for the month and trade at a trailing price to earnings ratio of 7.8, about half of that of the S&P 500 as a whole. Norwegian, meanwhile, is down 9.1% for the month and trades at a trailing P/E of 12.6.

"The market is capitulating on these stocks and if you think that the concerns about the virus will be more muted in a year then they're probably a good buy," he said.